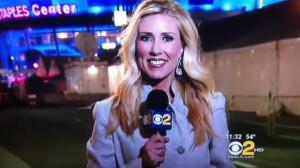 There so many bloopers, you can spend the whole day just watching bloopers on YouTube.  What I have compiled here is the what I thought where the top 10 news funniest news bloopers!

In this blooper the news anchor thought he had guest Ben Walker on the screen to talk about baseball.  At first the guest keeps quiet when asked if he could hear them, he comes up with a pretty witty comment!

#9 Filling in, due to murder

Bay Area anchor Ken Bastida was reading from the teleprompter but neglected to pause between sentences, leading to a run-on sentence and reporting that his co-anchor was not there due to having been murdered!

Did Ernie Anastos mean to say plucking but it came out wrong?  He later apologized but never explained why he used the bizarre phrase.  The best moment of this clip is the reaction from co-anchor Dari Alexander – her expression is priceless!

When Bill O’Reilly was a host on the tabloid show Inside Edition he became annoyed by the bad writing on the teleprompter and flipped out during a pretaped segment.  He went on a profanity laced tirade and at the end of the segment he can be seen ripping off his mic and storming off.

Fox News reporter Jan Skinner makes an unfortunate R-rated slip of the tongue – but even worse is that she repeats it.  The entire crew cracks up but she keeps her composure.  Colleague Shephard Smith, laughs and makes light of the slip.

This news reporter states that Obama was killed, instead of Osama.  I realize that there is only a one letter difference and mistakes can happen – but she continues to use Obama instead of Osama throughout the report.  Come on, surely you realize your mistake and correct it the first time!

#4 Reporter has stroke on air

Serene Branson was reporting an on-air live segment after the Grammy awards when her speech became slurred and incoherent.  It was stated later that she was suffering from a migraine that can mimic a stroke, she was taken to hospital but released soon after.  This video immediately went viral.

Fox News reporter Shepherd Smith had an odd R-rated gaffe about Jennifer Lopez while reporting.  He pledged after his slip that it “wont happen again” and it seems a lot of people were surprised by this slip – including himself!

It is hard to fathom what was going on in Dallas TV anchor Cynthia Izaguirre’s mind when she announced that a man had scaled Everest despite the fact that he is gay – then corrected herself “he’s blind”!  This video went viral and she is now internationally famous and has received e-mails from all over the world.