This list is of 10 inventors that have been wrongly credited for an invention that should have been credited to someone else or to others who worked in a combined effort on the invention.  Often the credited inventor did not invent the item but rather improved on a product and was the first to patent the product. Some schools still teach our children these inventor myths.

Although most people know that Al Gore did not invent the internet there are still some out there who do not know the facts so I thought this invention should still be on this list to clarify this myth.  Al Gore never actually said he invented the internet but he did say: “During my service in the United States Congress, I took the initiative in creating the Internet.”  The first person who thought of the idea to transfer information between different systems was Leonard Kleinrock in 1961.  J.C.R. Licklider was appointed as the head of the new IPTO (Information Processing Technology Office) organization in 1962. He applied his vision of a ‘Intergalactic Computer Network’ which outlined most of what Internet today is, his contribution was however mainly in terms of ideas.  1964, Paul Baran came up with a new design that challenged the entire telephony design by introducing a new communication system.  In October 1965, Thomas Marill and Lawrence Roberts set up the first WAN (Wide Area Network).  Based on the works of Ehud Shapiro, Paul Baran, Thomas Marill and many others, the final specifications of the first network node called ‘IMP’ (Interface Message Processor) were created by Lawrence Roberts and Barry Wessler. In 1973, Vinton Cerf and Robert Kahn designed the TCP (Transmission Control Protocol). This was a major improvement over the NCP (Network Control Program).  The major contribution to the way one navigates and views the Internet today was made by Tim Berners-Lee in 1990, by developing the HTML.

The man who deserves credit for being the very first to imagine and diagram the power of a personal or desktop computer is Charles Babbage from Britain.  His Difference and Analytical Engines were the astonishingly forward-thinking progenitors of the modern computer.  Seymour Cray, creator of the original supercomputer in 1958. Then there’s Douglas Englebart, who designed the world’s first computer mouse in the 1960’s and then had to wait about a decade and a half until the rest of the computer invention world caught up to his tool.  One of the earliest desktop computers on the U.S. consumer market was introduced in 1975 by Altair.  Apple introduced its Apple II computer and in 1981, International Business Machines (IBM) stepped into the desktop computer market.

This invention is surrounded by a lot of questions.  Firstly some believe that North African tribesmen have been using penicillin for thousands of years and that in 1897, Ernest Duchesne used the mold penicillum glaucoma to cure typhoid in guinea pigs.  Alexander Fleming, a Scottish bacteriologist in London, discovered penicillin by mistake when he was trying to study Staphylococcus bacteria in 1928 and realized that the Penicillium mold, the precursor to penicillin, was dissolving the deadly Staphylococcus bacteria.  in 1931, he decided that it would not last in humans for the duration needed to kill harmful bacteria, and stopped studying it.  Researchers at Oxford University in England, including Howard Florey, Ernst Chain, and Norman Heatley, experimented with Fleming’s discovery. They proved that penicillin would be both harmless and effective in mice, but did not yet have the volume needed to treat people. Orvan Hess and John Bumstead were the first people to use it to successfully treat a patient.  So although Fleming may have been key in the discovery, it took other scientists to develop penicillin so we could use it today.

Henry Ford is often credited to have invented the automobile but this is far from the truth.  Although several other German engineers were working on the problem at about the same time, Karl Benz generally is acknowledged as the inventor of the modern automobile.  An automobile powered by his own four-stroke cycle gasoline engine was built in Mannheim, Germany by Karl Benz in 1885 and granted a patent in January of the following year under the auspices of his major company, Benz & Cie., which was founded in 1883.  Ford’s claim to automobile fame lies mainly in the number of cars he produced. He was the first to develop an inexpensive, standardized car that was widely accessible. He was also able to cut the costs of production by creating assembly-line style production plants that utilized adapted conveyer belts. These factors made his Model T the most popular car in the United States from 1908, when it came out, to 1928, when it was replaced by Ford’s model A.

On December 1895, Wilhelm Röntgen (a German physics professor) saw a picture of his wife’s hand on a photographic plate formed due to X-rays. His wife’s hand’s photograph was the first ever photograph of a human body part using X-rays. His contribution to the science of X-rays and X-ray photography is so significant that they are also called Röntgen rays.  He called the ray as X since it is still unknown. Rontgen received a Nobel Prize in Physics for his invention.  Nikola Tesla created a special and effective single electrode X Ray tube. He published a paper about his invention in April 1887. In the development of the tube, Tesla used the Bremsstrahlung process. Several years after Tesla developed the unique tube, Thomas Edison created the fluoroscope. Since the development of this device in March 1896, the fluoroscope was used as the standard device for examinations of medical X-Rays.

#5 The Wright brothers invented the airplane

The Wright Brothers are generally regarded as the first to make a powered and sustained heavier-than-air human flight, but in fact, nine months prior to their famous takeoff on the 17th of December, 1903 at Kitty Hawk, New Zealander Richard Pearse performed the same feat in timaru, New Zealand (31 March 1903). Although it lacked an aerofoil section wing, Pearse’s flying machine resembled modern aircraft design much more than did the Wright brothers’ machine: monoplane rather than biplane; tractor rather than pusher propeller; stabiliser and elevators at the back rather than the front; and ailerons rather than wing-warping for controlling banking. It bore a remarkable resemblance to modern microlight aircraft.

In 1860 an early version of the telephone was claimed to have been invented by a man named Antonio Meucci. He originally called it a teletrofono.  In 1860 an Italian language newspaper in New York published a description of Meucci’s invention. Meucci coupled an electro-magnetic transmitter with a receiver. The motion of a diaphragm would modulate a signal in the coil by causing movement to an electromagnet. Although this was a dependable and lasting signal, it was a very weak signal.  Mr. Meucci’s patent for his invention expired in 1874 and he was not able to pay the continuation fee and Western Union labs claimed to have lost the working models that were Mr. Meucci’s invention. To further muddy the waters for Mr. Alexander Graham Bell there is the fact that he conducted experiments in the same lab where Mr. Meucci’s materials had been stored. Giving ample access to any notes or records left behind. In March of 1876 Mr. Bell was granted a patent and has forever been credited with inventing the telephone. 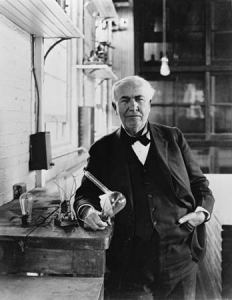 The very first electric light was invented as early as 1800 by English inventor, Humphry Davy. Through various experimentations with electricity, he invented a basic electric battery, soon followed by electric light once he realized that carbon glowed, producing light when connected to the battery.  In 1860, Sir Joseph Wilson Swan set about attempting to develop a practical, long-lasting form of electric light. It was he who realized that carbon paper filament worked well, however did burn up relatively quickly.  1877 saw American Charles Francis Brush develop a series of carbon arcs in order to illuminate a public square in Ohio, USA.  Thomas Edison experimented with thousands upon thousands of alternative filaments to find the best material for a long-lasting, high glow solution. 1879 was the year Edison finally realized that a carbon filament within an oxygen-free bulb glowed, but would not burn up for approximately 40 hours. Later, Edison invented a bulb that would not expire for over 1500 hours. 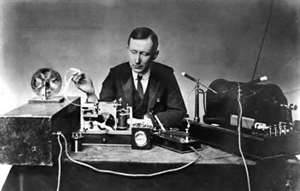 The real inventor of radio in now considered to be Nikola Tesla.  He invented so much stuff that it is hard to catalog all of it (much less understand it). Tesla got the idea for radio back in 1892 and demonstrated a remotely controlled boat in 1898. He did get basic US patents in 1897; these were for single-frequency radio, not spark gap. Yet somehow, he never got recognition for this work, while Marconi took the basic idea and ran with it.  Marconi was very successful in assembling a system for wireless telegraphy. Although he was born in Italy, Marconi spent a great deal of his life in England. It was there that he got the patent and formed the British wireless service. He later formed the Marconi Wireless Telegraph Company.

There is evidence that Leonard Digges invented both the reflecting and the refracting telescopes.  In 1608, Dutch eyeglass maker, Hans Lippershey offered a new device to the government for military use. This new device made use of two glass lenses in a tube to magnify distant objects. He may not have invented the telescope but Hans Lippershey has been credited with its invention. He, at least, applied for the patent for it first.  As soon Galileo Galilei heard about the device coming out of the Netherlands, he was fascinated. He began constructing telescopes, himself, before ever seeing one in person.  By 1609, he was ready for the next inevitable step. He began using telescopes to observe the heavens, becoming the first astronomer to do so.  While Galileo Galilei did not invent the telescope, he made great improvements in the technology. His first construction was a three power instrument, which he quickly improved to eight, twenty and then thirty power. With this new tool, he found mountains and craters on the moon, discovered that the Milky Way was composed of stars, and discovered the four largest moons of Jupiter.

One thought on “Top 10 Inventor Myths”