Top 10 Animals That Mate For Life

We usually don’t think of animals as being very romantic.  But in the spirit of Valentine’s Day, here are ten animals where the couple remains loyal to each other throughout life.  As you’ll see, birds are by far the best species when it comes to loyalty.  I’ve decided to rank these 10 by their average lifespan, because after all, that is how long they are remaining loyal. 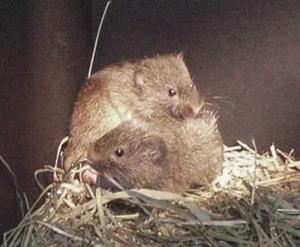 One of the lesser known animals on this list, prairie voles are also one of the most loyal.  Males choose a female, which they will mate with for the rest of their lives.  If the female dies, the male will not look for a new mate, and will remain alone for the rest of their lives.  Prairie voles, found in central North America, are the only species of rodent known to practice what is known as “pair bonding.”  They are rarely seen, because they live in underground burrows, and are usually nocturnal, except in extremely cold weather. 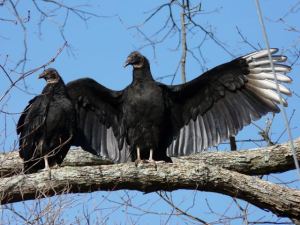 The black vulture, also known as the American black vulture to prevent confusion with the Eurasian black vulture, can be found from southern United States to central Chile and Uruguay.  After the female chooses a male following a lengthy courtship ritual performed on the ground, the couple stays together for life.  The couple will incubate and raise their children, which are snow white, together.  What makes black vultures unique is that males will actually attack a male that is caught “cheating” on his mate. 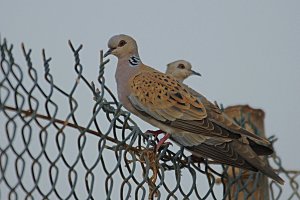 Turtle Doves are common throughout Europe, but can also be found in northern Africa and Russia.   They have become a symbol of eternal love, featuring in the Bible, William Shakespeare’s poems, and as a pair in “The 12 Days of Christmas.”  Their mating for life has been the reason they have become associated with love, although their mournful voice also has influenced their place in culture.  The turtle dove is also one of the animals that will remain alone if their mate dies. 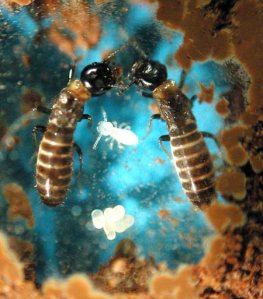 Termite queens can lay up to 2,000 eggs a day, and usually choose one male (a “king”) to mate with for life.  This is unlike ants, where queens choose a male to mate with, who dies directly after mating.  A termite colony can consist of a queen, king, and all their offspring.  The other termites are divided into workers and soldiers, with the nymphs (the young) receiving special care.  Interestingly, termites were found to “like” rock music.  When wood was vibrated with rock music, termites would eat voraciously, and unusually, wouldn’t share food with nymphs and the queen. 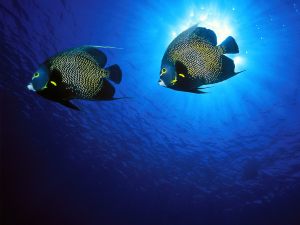 French angelfish will stay together as a couple, defending their territory from neighboring couples.   Both partners will fight for their area, as the species is extremely territorial.  Juvenile French angelfish will actually “work” at cleaning stations.  Snappers, surgeonfish, moray eels, and other species of fish will have algae and bacteria cleaned off by the juveniles.  When the fish mature, sponges become their main diet, as they coat sponge in a thick mucus to make digestion easier.  French angelfish are found in the western Atlantic, from Florida all the way through the Caribbean to the water off Brazil. 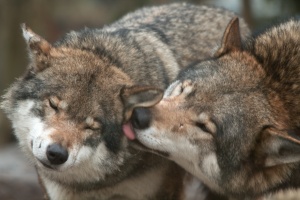 Most species of wolves, including gray wolves, will mate for life.  Normally, only the alpha wolves in the pack will be allowed to mate, and will “rule” the pack together.  However, sometimes the lesser wolves, known as subordinates, will mate as well.  After choosing a mate, wolves will usually stay with their mate for life.  However, when a wolf’s mate dies, the wolf will search out a new mate, instead of staying alone for the rest of their life. 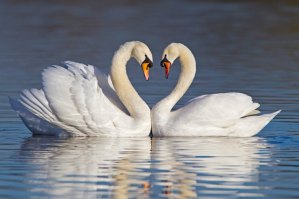 Swans are probably the animal most associated with love, largely due to the heart shape a couple forms with their necks.  There are also famous for mating for life, and remaining alone when their mate dies.  However, “divorce” can rarely occur in the swan world.  Usually, a nesting failure is the reason for the split.   Swans can be found in Europe, Australia, North America, and southern South America.  One of the famous species, the mute swan, is not actually mute.  Its name comes from the fact that the species is much quieter than other swan species, but it can still honk and hiss. 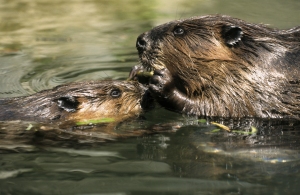 When beavers are three years old, they find a mate, which they stay with for life.  A colony of beavers consists of a couple and their offspring.  The colony becomes extremely territorial, and will mark their territory through piles of mud they build, as well as marking it with scent.  Babies are born with their eyes open, and can swim in only 24 hours.  Both parents help care for the baby for two weeks, before the beaver is independent.  They stay in the colony until they are 2 years old, when they are kicked out to find a mate and start their own colony. 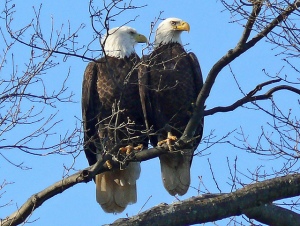 America’s beloved national symbol is also very loyal.  Bald eagles reach sexual maturity at about four years of age, and the males will go through an elaborate courtship display including acrobatic flying to win over a female’s heart.  The pair will then stay together, unless one of them dies, causing the remaining bird to find a new mate.  If a pair has failed in breeding attempts, they may also “divorce” and split up.  Bald eagles are found throughout the entire contiguous United States, parts of Canada, and northern Mexico. 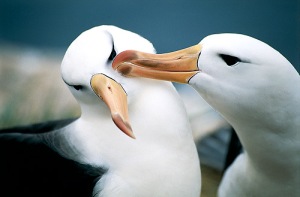 Albatrosses are a family of 21 large seabirds found commonly over the South Ocean and North Atlantic.  The great albatross has the largest wingspan of any bird, at 11 feet.  Albatross live much longer than most birds (the oldest recorded lived to 61 years), so they are much slower at mating.  Young albatross will spend years learning the complex courtship dances, before finally being able to win over a female.  The pair will take care of their chicks for half a year before finally fledging the chicks, unaware of whether they have survived or not.