To wrap up our October Horror/ Halloween month here is a final Halloween themed list.  Enjoy Halloween, have fun trick-or-treating and be safe!

# 10 Samhainophobia – the fear of Halloween 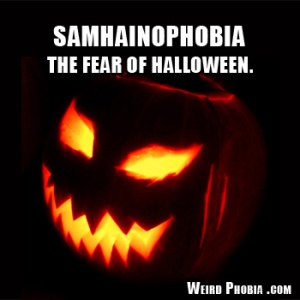 In Mexico it is custom to celebrate El Dia’ de los Muerlos – the Day of the Dead. This celebration starts at midnight on Oct 31st and continues until Nov 2nd. The festivities are abundant in images related to death. The difference is that in typical Halloween festivities death is something to be fears but in El Dia’ de los Muerlos death is something to be celebrated. 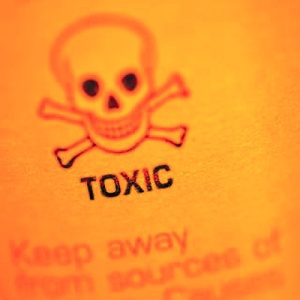 On Oct. 31st 1964 Helen Pfeil of New York was arrested for handing out arsenic laced treats. Annoyed that many of the trick-or-treaters were too old to be asking for free candy, the 47-year-old housewife made up packages of poison treat to give out to teenagers. Helen Pfeil was arrested and pleaded guilty of endangering children and served a suspended sentence.

According to tradition, if a person wears their clothes inside out and then walks backwards on Halloween, they will see a witch at midnight. 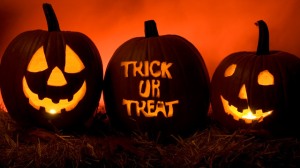 In North America trick-or-treating has been a customary Halloween tradition since the late 1040’s. The tradition of going door to door receiving food already existed in Great Britain and Ireland in the form of ‘souling’. Children and poor people would sing and say prayers for the dead in return for cakes.

An Irish myth exists as to the practice of Jack-o-lanterns. A man called Stingy -Jack invited the devil to have a drink with him. Stingy-Jack didn’t want to pay for the drink so he convinced the devil to turn into a coin so he could use the coin to pay for the drink. But Jack decided to keep the coin and put it in his pocket. Later on the devil was freed but Stingy-Jack continued to play tricks on the devil. When Stingy-jack died God would not allow him into heaven and the devil would not allow him into hell. The devil sent Jack off into a dark night with only a burning coal to light his way. Jack put the coal in a carved turnip and the Irish refer to the ghostly figure as Jack of the lantern.

#4 Why we Wear Costumes on Halloween 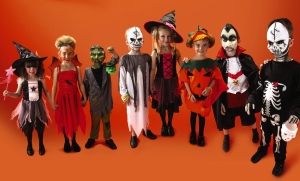 In Scotland there is a tradition that began in the middle ages called ‘guising.” This is a tradition celebrated by children wearing costumes and disguises performing a different trick on each house they visited in order to receive treats. It is believed that this is where the tradition of dressing in costumes at Halloween comes from.

#3 History of the Jack-o-Lantern 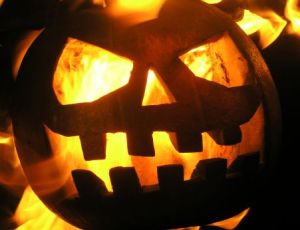 We all love carving pumpkins on Halloween, but it is believed that pumpkins were not the original choice for carving. Carving of Jack-o-lanterns on Halloween is believed to have originated in Ireland where turnips and beets were used. They were often carved with grotesque faces to represent spirits and goblins.

#2 Meaning of the word “Halloween”

Halloween comes from a ancient pagan festival celebrated by Celtic people over 2,000 years ago called Samhain. Samhain means “Summers end” and marks the beginning of Winter. The Celts believed that Samhain was a time the dead could walk among the living.